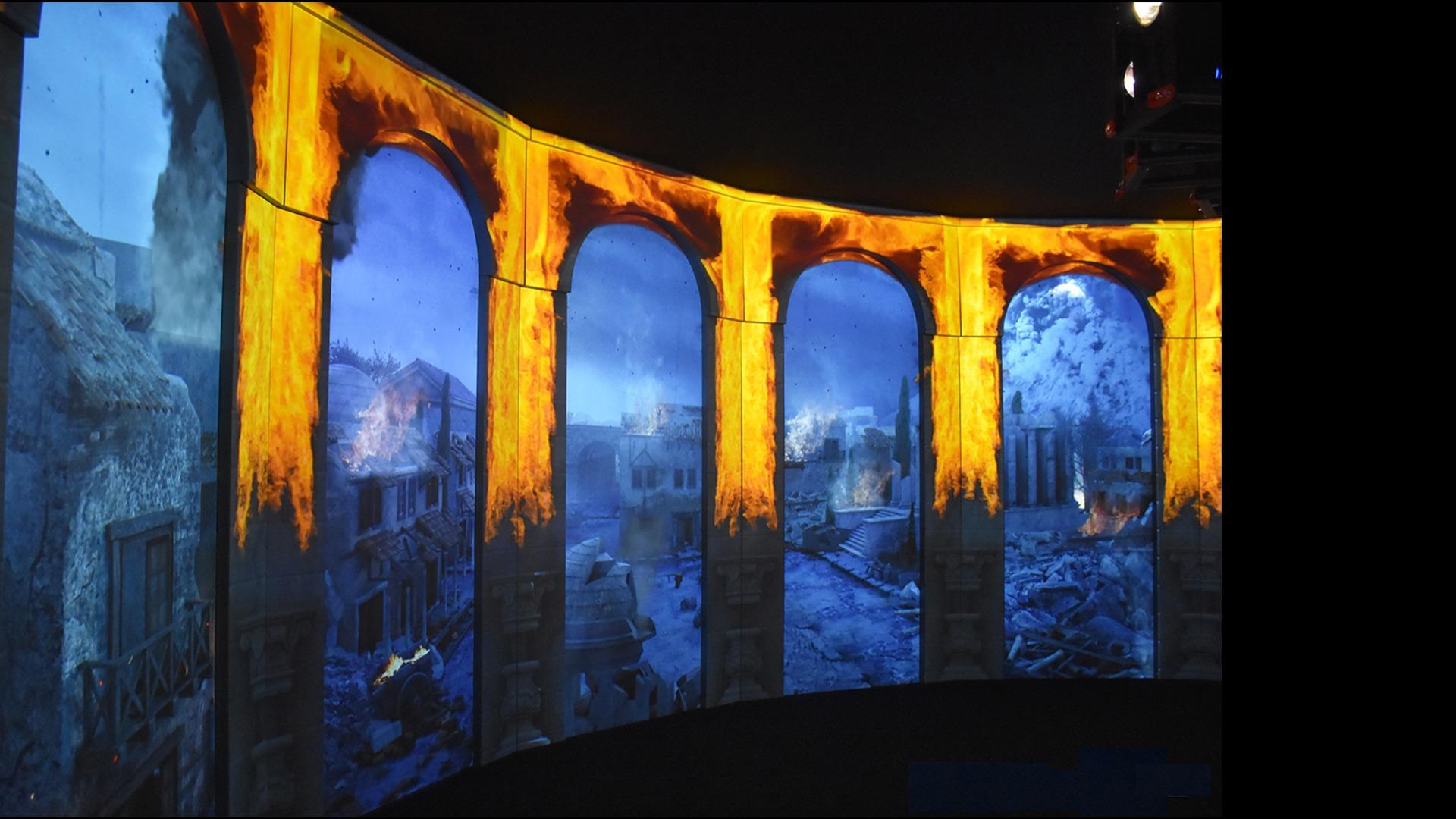 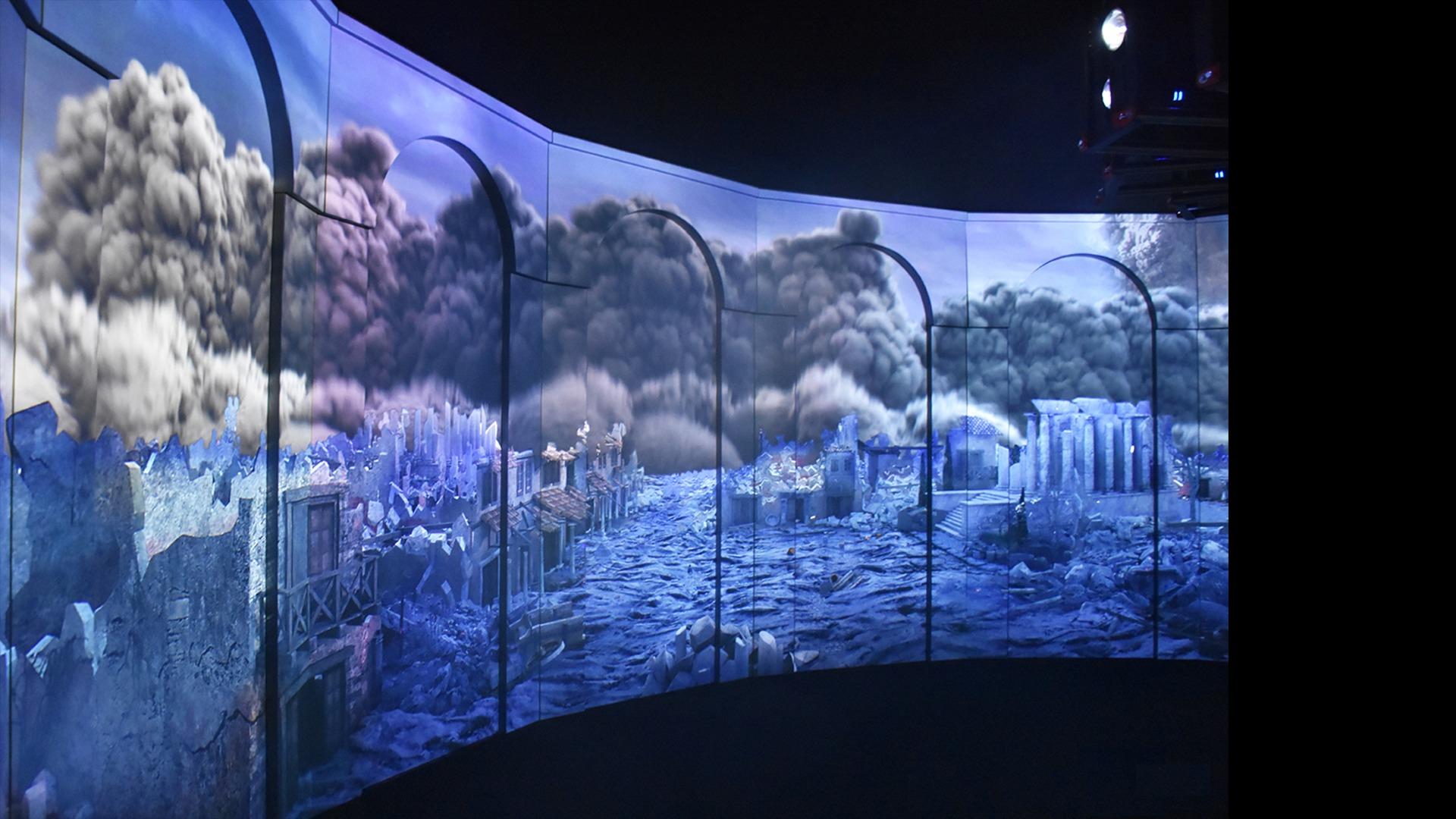 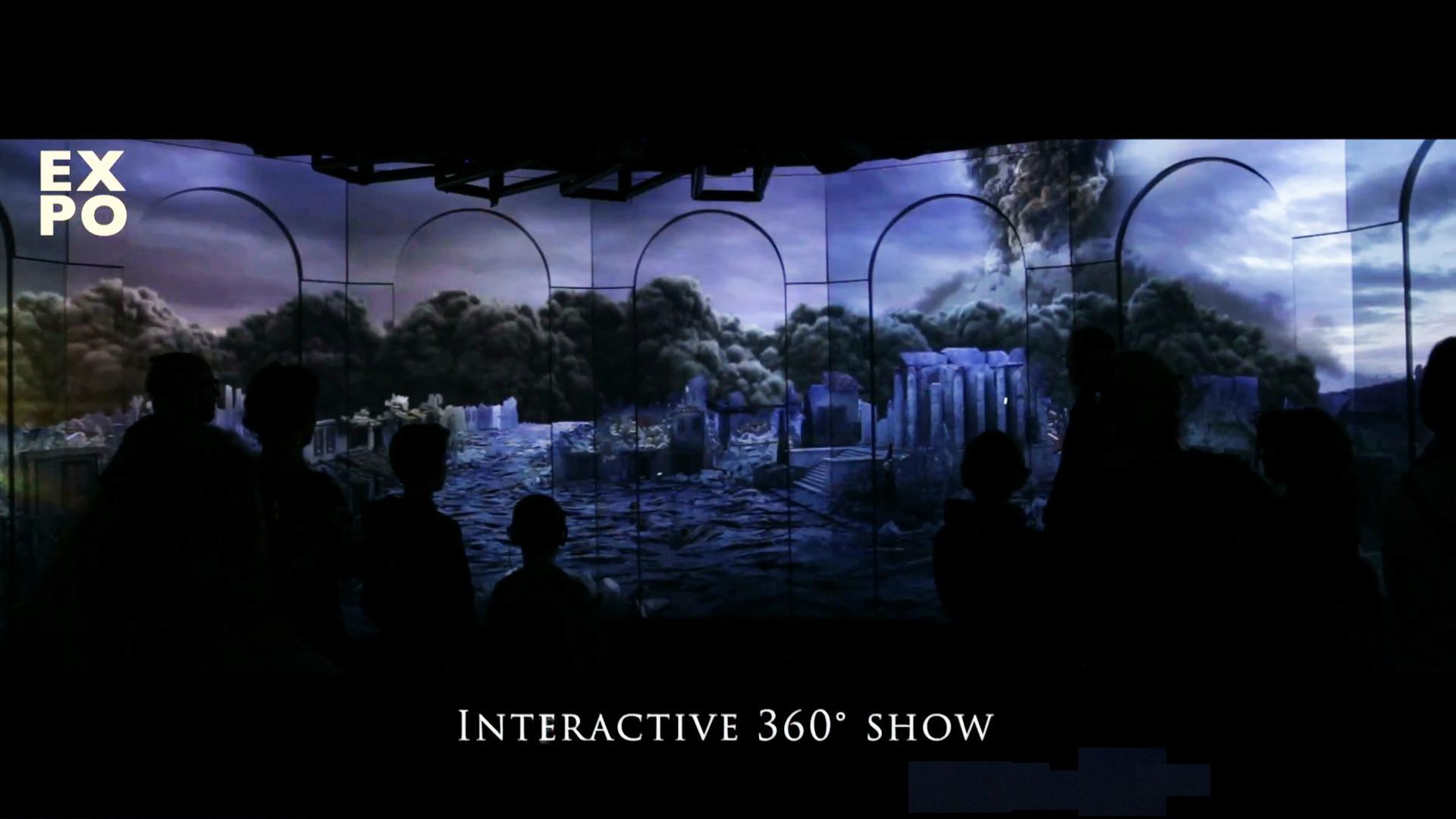 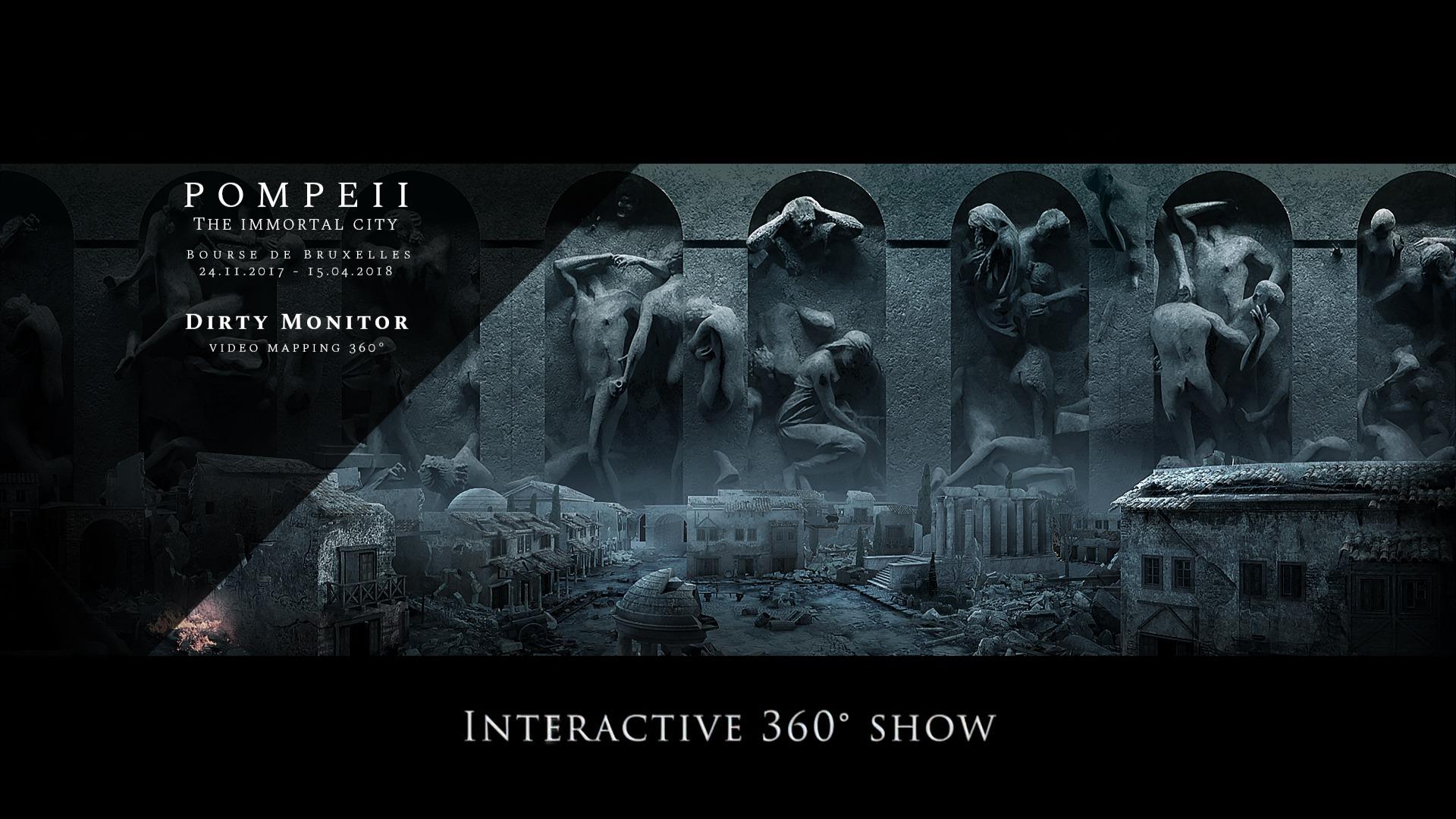 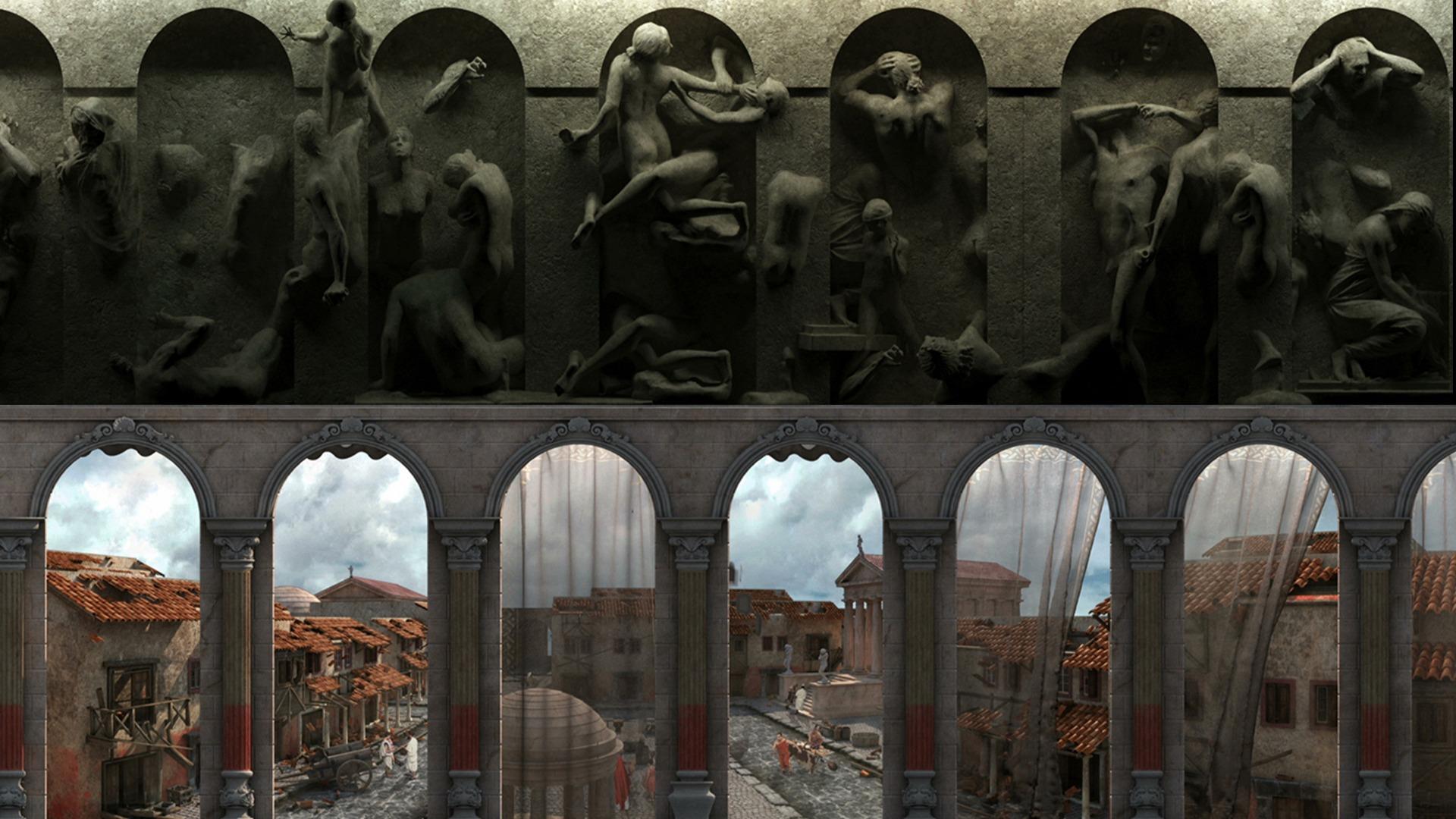 The company Tempora commissioned Dirty Monitor in the context of the organization of his new exhibition entitled « Pompeii : The Immortal City » in order to create an introductory immersive experience to the topic.

Intended to be exported all around the world, the exhibition was first installed in Brussels stock exchange in November 2017.

At the beginning of the path of the exhibition, stood a circular room where the creative team Dirty Monitor wanted to bring about a true immersion in the very heart of Pompei making an historical reconstruction in the form of a 360° narrative projection mapping show. It plunges the audience into the before, during and after of a disaster: the eruption of the Vesuvius and the destruction of the city in 79 AD.

The whole in a realistic graphic style rich in 3D elements such as the creation of an Atrium whose windows overlook the city but also prodigious animations and impressive smoke and fire effects. So as to design the scenario it was important for the team to surround himself with historians in order to strictly respect historical truth.

To further strengthen the emotional impact on the audience linked to this dramatic historic moment, Dirty Monitor has also created a captivating and surprising  original soundtrack.

The rest of the immersive visit experience provide visitors more surprises. The latter were able to discover over one hundred archaeological items originating from Pompeii, including a large number being exhibited for the first time, demonstrate the knowledge that the Romans had about nature as well as their scientific and technical know-how at the moment Vesuvius erupted in 79 A.D.

After its great success in Brussels proved by several extensions, the exhibition has crossed the Atlantic in order to be presented in the United States of America. After opening its doors in some American great museums as the Science Museum of Virginia, in 2020 it has set up in the MAC: The Northwest Museum of Arts & Culture.